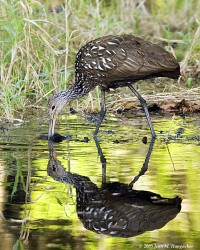 This 300+ acre site is owned by Sarasota County and is the County’s primary flood mitigation zone. It is managed by the division of Storm Water and Sarasota County Parks & Recreation. The Sarasota County Department of Transportation is also involved in its management and maintenance.

Mainly consisting of open marshlands, deep ponds, shallow pools, and canals, the Celery Fields are edged by oaks, willows, and pines on the eastern and southern boundaries. The Fields are roughly divided into three segments: the North Cells receive water from the Fruitville Road entry canal and have the deepest ponds. From there, the water is channeled into the Central Cells which cover the area that you see when looking west from the gazebo. The water then flows under Palmer Boulevard into the South Cells, and then southward into Phillippi Creek.

In early 2001, Sarasota Audubon began conducting bird surveys at the Fields. To date, 206 species have been recorded. Wintertime offers particularly good birding, hosting up to 8 species of sparrows, Marsh and Sedge Wrens, and several species of rails, including Sora and Virginia. The Fields also host breeding birds, including Black-necked Stilts, King Rail, Least Bittern, Limpkin, Eastern Towhee, Barn Owl and Eastern Meadowlark. Least Terns breed on nearby buildings and use the ponds as a primary food source. Rarities show up from time to time, including Upland and White-rumped Sandpipers, Short-eared Owl and Nelson’s Sharp-tailed Sparrow.

Sarasota County, recognizing the importance of the Celery Fields as a food and habitat source to a wide variety of birds, is working with Sarasota Audubon to restore 80+ acres in the Southern Cells into a more traditional wetland.

Historically the area was a sawgrass marsh and evidence of early native settlement has been found. The site is also rich in paleontological artifacts.

From about 1920, Mrs Potter Palmer extended her vegetable growing area from Gulf Gate to the location of the present Celery Fields. Prior to that time, the site was a rich muckland known as Big Camp Saw Grass and Tatum Saw Grass. The muck (peat) occupied the lowest 2,000 acres, and was surrounded by a higher dark loam area and an even higher sandy area. The depth of the muck varied from a few inches to 8 feet, and was composed of from 66 to 73% organic material. Below the muck layer was sand, which varied inversely with the depth of the muck. A clay or marl layer lay about four feet deeper still.

The Palmer interests engaged Arcadia engineer J .A. Kimmel to make topographical maps and a drainage plan for the entire 8,000-acre area. The site was organized as the Sarasota Fruitville Drainage District in 1921. The firm of Cravens and Kimmel prepared excellent 1-foot contour maps for drainage, which made development in the Phillippi Creek watershed possible.

Construction of the Celery Fields began in 1923. The main canals were finished by 1926. An experimental farm of 2,000 acres was set up under the direction of E.L. Ayres, then County Agent.

Although different vegetables were tried, by 1927, it was decided to grow predominantly celery. Roads were built across the area. Since the muck was constituted in great part by acid, lime was added: 1.5 to 2 tons of ground limestone and 1 to 1.5 tons of hydrated lime per acre. Unit ditches served 10-acre tracts. Artesian wells served two 10-acre tracts from each 6-inch well. At first, just a spring crop was harvested. Later both spring and fall crops were grown.

The farms, which were sold off as private units, continued to produce celery until the property was acquired by the County in the 1995.

Please Do Not Feed Wildlife

It has been brought to our attention that some Meadow Walk residents have been observed feeding wildlife. Here, in Florida, it is illegal to feed Manatees, Sand Hill Cranes, Raccoons, Foxes and Alligators. 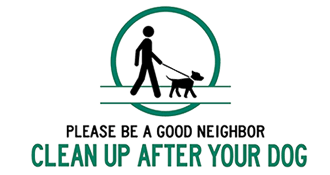 Pick Up After Your Dog

Remember, dogs must be kept on leashes at all times. Please abide by this rule for the safety of your dog, your neighbors, and your neighbor’s dogs. Even a friendly dog could endanger a child on a bike or scooter, and don’t forget to pick up after your dog.

Our subdivision is scheduled for trash and recycling pick-up on Tuesdays. According to Waste Management and Sarasota County, no trash is to be placed curbside until 4:00 pm the day before pick-up.

If you are considering painting the exterior of your house any color other that the original, you must first receive approval from the Modification Committee. If you are interested in looking at the approved Meadow Walk colors please contact the Board of Directors, the Modification Committee, or see the Construction Guidelines for specific details.

Please remember, there is no parking allowed on the grass anywhere in the Meadow Walk Subdivision. Although you are legally allowed to park vehicles at curbside we urge you to try and avoid parking overnight on the street for safety reasons. Please refer to the Meadow Walk By-Laws for specific details.

We’ve received a friendly request from our mail carrier asking that residents not block the mailboxes. This includes parking in front of or too close to the box.